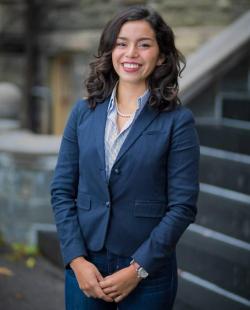 Vanessa Navarro-Rodriguez is a Ph.D. student in political science at the University of California, Berkeley, focusing on comparative politics and international relations. She spent the first two years of her Ph.D. researching the prevalence of sexual exploitation and abuse (SEA) by peacekeepers during UN peacekeeping operations. Her dissertation looks at the heterogeneity of the Mapuche in Chile and their political behavior. Prior to attending U.C. Berkeley, she graduated from Cornell University magna cum laude with a bachelor’s degree in Government. She has previously worked on a variety of research projects in both International Relations and American politics. She most recently worked for Aila Matanock's Invited Interventions project collecting information on security-related interventions in Sub-Saharan Africa. Prior to graduate school, she worked as Sabrina Karim’s research assistant for the Elsie Initiative on Women in Peace Operations, and collaborated on the MOWIP Methodology. Her work has been supported by the UC Berkeley Center for Latin American Studies, the UC Berkeley Mentored Research Award, the U.C Berkeley Graduate School Chancellor’s Fellowship, the Samuel R. Berger National Leadership Scholarship from Cornell University, and the Ralph Bunche Summer Institute.