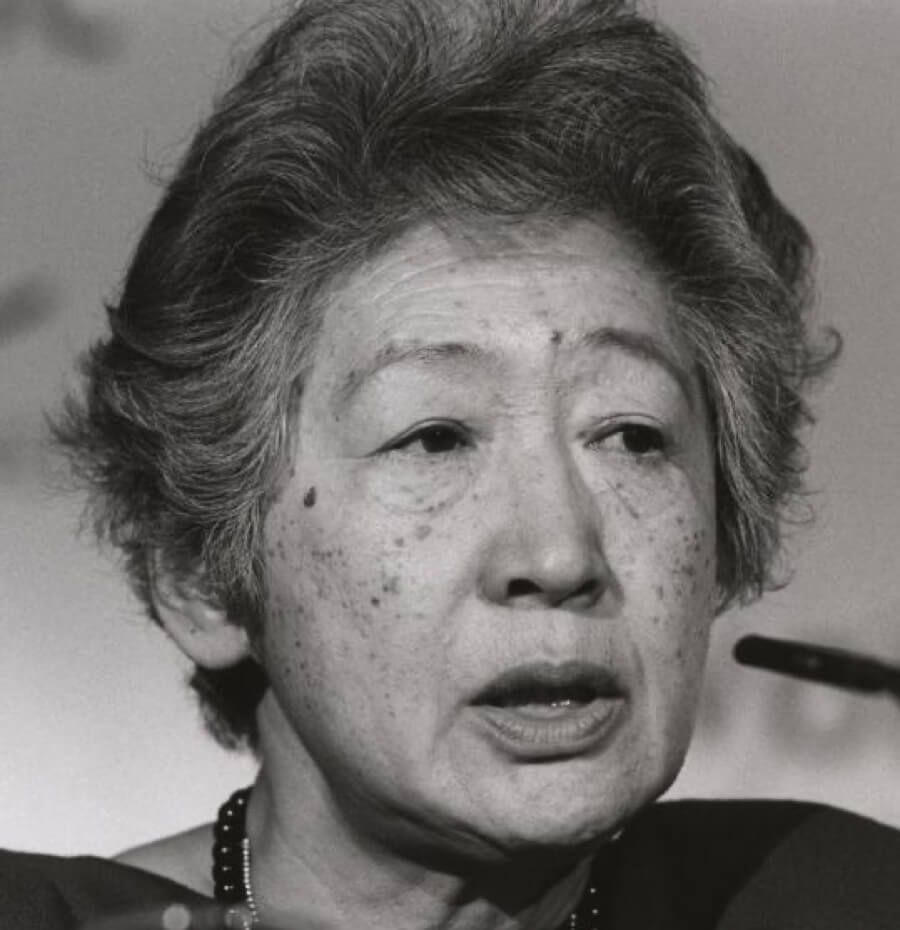 In 1991, Sadako Ogata became the first woman, the first Japanese person, and the first academic to be named the United Nations High Commissioner for Refugees (UNHCR).

Sadako Ogata is among the most prominent alumni of Berkeley’s Ph.D. program in Political Science. A 1963 graduate, she was a Japanese academic, diplomat, author, administrator, and professor emeritus at the Roman Catholic Sophia University.  In 1991, she became the first woman, the first Japanese person, and the first academic to be named the United Nations High Commissioner for Refugees (UNHCR).  Well-respected by UN staff and world leaders alike, she was described by her colleagues as a "five-foot giant" for her formidable negotiating skills and ability to confront hostile factions. Ogata is rightly remembered for having broken the gender barrier at a major UN agency. But just as important a part of her legacy is that she transformed UNHCR, expanding its protective coverage to encompass not just refugees but also internally displaced people and other war-affected civilians.

Ogata was born on Sept. 16, 1927, in Tokyo, the eldest daughter of Toyoichi Nakamura, a diplomat in the foreign ministry, and Tsuneko Yoshizawa, a granddaughter of Tsuyoshi Inukai, a prime minister who was assassinated in 1932. After earning her Bachelor’s degree from the University of the Sacred Heart in Tokyo, a Rotary Foundation fellowship took her to the Georgetown University School of Foreign Service in Washington, where she pursued a master’s degree. Ogata earned a doctorate in political science from the University of California, Berkeley, specializing in political theory, international relations, and East Asian affairs. Ogata initially pursued a career in academia because she thought it would be almost impossible to enlist in the foreign service and keep up with the demands of being a mother. But with her strong scholarship in international relations and her fluency in English, she was appointed to a Japanese delegation to the United Nations General Assembly in 1968. Ogata subsequently took on roles as a minister in Japan’s mission to the United Nations and as chairwoman of the executive board of the United Nations Children’s Fund.  In 1978, she was awarded the Elise and Walter A. Haas International Award, which honors a Berkeley alumnus/a who is a native, citizen, and resident of another country and who has a distinguished record of service. In 1995, Ogata was awarded the Philadelphia Liberty Medal, an annual award given by the National Constitution Centre of the US, which recognizes "leadership in the pursuit of freedom".

On her time at Berkeley

In a 1992 interview with Institute of International Studies, Ogata spoke fondly of her time at Berkeley. “Berkeley was beautiful, sunny, a very exciting place. Whenever your intellectual curiosity grew into all sorts of directions, there were always very outstanding professors to deal with it. Intellectually, Berkeley was a very expanding experience. Berkeley was also a very liberal institution. I don't know how it is today, but this was just before the Free Speech Movement, and people were questioning a lot of values.  It took me quite a few years before I finally finished the dissertation. At one point I was not sure that I should finish the degree, but I think it was my advisor Professor Ernie Haas who said "It's a union card; you'd better get it done before you become involved." I am very glad that I finished the degree because it facilitated getting jobs and so forth later on.”

At UNHCR, Ogata oversaw large-scale emergency operations in northern Iraq, Bosnia and Herzegovina, Kosovo, and the Great Lakes region of Africa. “Women were not expected to serve in such high-ranking positions in international agencies,” said Kuniko Inoguchi, a member of Japan’s upper house of Parliament and a friend of Ms. Ogata’s.

On her sources of inspiration

"I have often been asked from where I draw my energy," she said in an op-ed for UN Chronicle. "I often think of all the refugees whom I met in camps, in villages, in reception centers, in shantytowns. I believe that what has kept me going is the conviction that our collective efforts can turn the terror and pain of exile into the safety and unity of family and friends."
In her book "The Turbulent Decade - Confronting the Refugee Crises of the 1990s", she described her stint at the UN as a period of constant humanitarian crises. "My concern was always centered on providing security to the refugees and giving them opportunities to lead happier lives," she said.