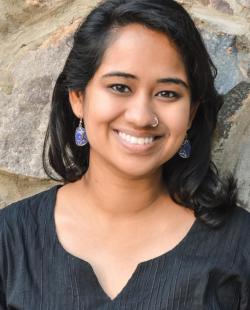 Surili Sheth is pursuing a Ph.D. in Political Science at the University of California at Berkeley. Her research interests center on identities (such as gender, religion, and caste), public service delivery, local institutions and inequality in South Asia and the United States.

Prior to pursuing her Ph.D., Surili worked as a fellow with IMAGO Global Grassroots in Ahmedabad and Delhi, a manager with IDinsight in Hyderabad, Vijayawada, and Delhi, and a research associate with the Jameel Poverty Action Lab (J-PAL) in Hyderabad, India. In these capacities, she has worked with SEWA, Transform Rural India, the Society for the Elimination of Rural Poverty in Andhra Pradesh (SERP), Ministry of Rural Development (Andhra Pradesh), and Gates Foundation on projects encompassing biometric smartcards and governance, rural livelihoods, women's agency and empowerment, and water and sanitation. She has also worked with the Affordable Housing Institute in Boston and the Busara Center for Behavioral Economics in Nairobi. Surili holds an MPA/ID from the Harvard Kennedy School of Government and a B.S. in Economics and Political Science from Ohio State University.