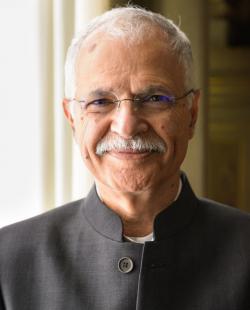 Pradeep Chhibber studies the politics of India, political parties and party systems. His recent research is on the influence of ideology on party system change, religion and politics, elections and parties, and the politics of development in India.  Ideology and Identity: The Changing Party System of India co-authored with Rahul Verma was published by Oxford University Press in 2018. The book lays out an ideological framework for understanding party system change in india since 1952. The book also explains the reasons behind the rise of the religious right dominated party system in contemporary India. Religious Practice and Democracy (with Sandeep Shastri) Cambridge University Press (2014) examines the relationship between everyday religious practice and political representation in contemporary India.

Social Divisions and Party Politics: In the area of party systems most of his research previously focused on the relationship of social divisions and party systems. This issue was considered in a paper co-authored with Mariano Torcal Electoral Strategies, Social Cleavages, and Party Systems in a New Democracy: Spain Comparative Political Studies, 1997. The paper was a runner-up for the best paper award given by the Comparative Politics Section of the American Political Science Association. Further investigation of this phenomenon can be found in State Policy, Rent Seeking, and the Electoral Success of a Religious Party in Algeria(Journal of Politics, 1996) and in some of his research on India.  The relationship between social divisions and party systems in India is examined in Democracy without Associations: Transformation of Party Systems and Social Cleavages in India. University of Michigan Press 1999. This book won the Leon Epstein Award in 2000 for the best book published in the previous two years in the area of political parties and organizations.

Party Organization: Currently he has written two papers on the influence of party organization on party systems and the poltiics of representation.  The first "Dyanastic Parties: Organization, Finance and Impact (Party Politics March 2013)" develops an argument for why some parties are dynastic.  In "Party Organization and Party Proliferation in India" (Party Politics July 2014) Pradeep, Francesca Jenensius and Pavithra Suryanarayan examine how the career incentives of politicians influences the number of parties.

The influence of party politics and party systems on state policy and the delivery of public goods appears in Do Party Systems Count? The Number of Parties and Government Performance in the Indian States co-authored with Irfan Nooruddin (Comparative Political Studies. The gendered nature of representation in electoral politics in India is considered in Why Some Women Are Politically Active: The Household, Public Space, and Political Participation in India (International Journal of Comparative Sociology.

Research on the political economy of India has focused on the role of elites in economic reform. The Indian experience is compared to that of China in Local Elites and Popular Support for Economic Reform in China and India Comparative Political Studies, 2000 (with Samuel Eldersveld). The influence of firm ownership on firm performance is considered in a series of papers co-authored with Sumit Majumdar. One of them, entitled State as Investor and State as Owner: Consequences for Firm Performance in India,â€ appeared in Economic Development and Cultural Change, 1998.

In  "Why the Poor Vote in India: "If I Don't Vote I am Dead to the State"  Amit Ahuja and Pradeep show that the poor and the non-poor have very different motivations for voting.  The poor, who face a capricious state, report voting as a right whereas those who are connected see voting as a means to gain some material benefit from the state .

In collaboration with the Norwegian Institute of International Affairs (NUPI) and the Center for the Study of Developing Socieities (CSDS) he is collecting data on the the influence of electoral politics on development at the micro (polling station) level.

Pradeep is an active contributor to the editorial pages of ThePrint. He has also written two longer pieces on the electoral sucess of the BJP in the 2014 elections. The link to one of them is http://www.epw.in/national-election-study-2014/bjps-2014-modi-wave.html

Pradeep Chhibber and Rahul Verma. The BJP's 2014 'Modi Wave': An Ideological Consolidation of the Right" Economic and Political Weekly, (September 27, 2014).

Amit Ahuja and Pradeep Chhibber. Why the Poor Vote in India: â€œIf I Don’t Vote, I am Dead to the  State,â€ Studies in Comparative International Development (December 2012), pp 389-410.

"Duvergerian Dynamics in the Indian States: Federalism and the Number of Parties in the State Assembly Elections." Party Politics, 2006, 12(1): 5-34 (with Geetha Murali).

"Federal Arrangements and the Provision of Public Goods in India." Asian Survey, May/June 2004, 44: 339-52 (with Sandeep Shastri and Richard Sisson)

"Do Party Systems Count? The Number of Parties and Government Performance in the Indian States." Comparative Political Studies, March 2004: 152-187.

"Why Some Women Are Politically Active: The Household, Public Space, and Political Participation in India." International Journal of Comparative Sociology, 2003, 43: 409-429.

"Party Aggregation and the Number of Parties in India and the United States." American Political Science Review, June 1998: 329-42 (with Ken Kollman).

"State as Investor and State as Owner: Consequences for Firm Performance in India." Economic Development and Cultural Change, April 1998: 561-580 (with Sumit Majumdar).