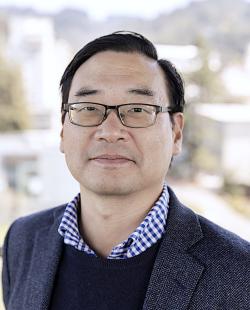 Daniel Lee is Associate Professor of Political Science at the University of California, Berkeley.  He specializes in political theory, the history of political thought, and jurisprudence.  His research concerns the reception of Roman and canon law in later medieval and early modern political thought and their influence on modern doctrines of statehood, sovereignty, and rights, especially in the legal and political thought of Jean Bodin and Hugo Grotius.  More generally, he has been interested in the relationship between legal science and social science in the history of ideas, as well as the foundations of deontic logic in early modern jurisprudence.  His wider interests in political theory also include the foundations of democratic theory, the theory of rights, constitutional theory, republicanism, and the philosophy of the social sciences.

Daniel Lee is the author of two books.  The Right of Sovereignty: Jean Bodin on the Sovereign State and the Law of Nations (Oxford, 2021) examines the origins of sovereignty as the vital organizing principle of modern international law in the legal and political thought of its most influential theorist, Jean Bodin.  Professor Lee explores Bodin's creative synthesis of classical sources in history, philosophy, and the medieval legal science of Roman and canon law in crafting the fundamental rules governing state-centric politics.  The Right of Sovereignty is the first book in English on Bodin's legal and political theory to be published in nearly a half-century and surveys themes overlooked in modern Bodin scholarship: empire, war, conquest, slavery, citizenship, commerce, territory, refugees, and treaty obligations of states.  Professor Lee's first book, Popular Sovereignty in Early Modern Constitutional Thought (Oxford, 2016), traced the juridical origins of modern popular sovereignty doctrines in the legal science of the Roman law tradition.

He is currently working on two new projects.  The first is Divisions of Law, a study of Bodin's outline of general jurisprudence, the Juris Universi Distributio ['A Division of the Whole Law'], and early modern legal science, to be published by Oxford University Press.  The second is The Science of Right, which traces the foundations of deontic logic and the theory of rights in the Continental legal science of the Enlightenment.

Professor Lee is the winner of the APSA Leo Strauss Award, the Forkosch Prize, and a Mellon Fellowship in the Columbia Society of Fellows.  Prior to his arrival at Berkeley, he taught political theory at the University of Toronto and Columbia University.  He serves on the advisory boards of the Berkeley Program in Medieval Studies, the Kadish Center for Morality, Law, and Public Affairs, and as faculty affiliate of the Designated Emphasis in Renaissance and Early Modern Studies at Berkeley.  Professor Lee holds degrees from Columbia, Oxford, and Princeton.

The Right of Sovereignty:  Jean Bodin on the Sovereign State and the Law of Nations.  Oxford: Oxford University Press, 2021.    OUP Blog.

2021.  Delegating Sovereignty.  Symposium on Koskenniemi, To the Uttermost Parts of the Earth.  European Journal of International Law 32.

2018.  The State Is a Minor:  Fiduciary Concepts of Government and the Roman Law of Guardianship from Azo to Hobbes.  Ed. Evan Criddle, et al., Fiduciary Government.  Cambridge: Cambridge University Press.

2013.  Office Is a Thing Borrowed: Jean Bodin on the Right of Offices and Seigneurial Government.  Political Theory 41

2008.  The Legacy of Medieval Constitutionalism in the Philosophy of Right: Hegel and the Prussian Reform Movement.  History of Political Thought 29.

2008.  Private Law Models for Public Law Concepts: The Roman Law Theory of Dominium in the Monarchomach Doctrine of Popular Sovereignty.  The Review of Politics 70.