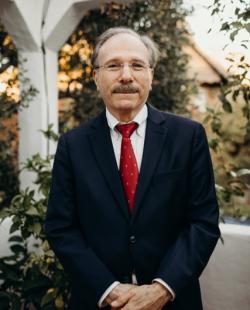 George Breslauer is a Professor of the Graduate School in the Department of Political Science.  His areas of specialization are the politics and foreign relations of the USSR, post-Soviet Russia, and the states that constituted “world communism.”  He is the author or co-author of seven books---including Khrushchev and Brezhnev as Leaders (1982), Gorbachev and Yeltsin as Leaders (2002; Russian-language edition, 2021), and The Rise and Demise of World Communism (2021); he is also the editor or co-editor of seven volumes. In 1997, Professor Breslauer was given the Distinguished Teaching Award of the UC Berkeley Social Sciences Division. In 1998, he was appointed “Chancellor’s Professor” for combining exceptional performance in scholarship, teaching, and service to the University. From 1992 through 2015, he served continuously as Editor of the scholarly journal, Post-Soviet Affairs. Professor Breslauer also served nationally as Vice-Chair of the Board of Trustees of the National Council for Soviet and East European Research (1988-1991) and as a member of the Executive Committee of the Board of Directors of the American Association for the Advancement of Slavic Studies (1991-1993).

At UC Berkeley, Breslauer has also had a long and distinguished career as an administrator. He chaired the Center for Slavic and East European Studies (1984-1994) and the Department of Political Science (1993-1996), served for seven years as Dean of the Division of Social Sciences within the College of Letters and Science (1999-2006), and as Executive Dean of the College (2005-2006), before his appointment as Executive Vice Chancellor and Provost of the campus (2006-2014).  In retirement, he served for four years as Director of the UC Berkeley Magnes Collection of Jewish Art and Life (2015-2019).  He has also offered undergraduate lecture courses on “The Rise and Fall of World Communism.”

In 2015, Professor Breslauer was elected a Fellow of the American Academy of Arts and Sciences.