Journal Launch & Round-Table Discussion on the State of the Field

The Journal of Right-Wing Studies (JRWS), an academic journal operated by UC Berkeley’s Center for Right-Wing Studies (CRWS), is pleased to announce its official launch. The journal will host a live roundtable discussion on the state of Right-Wing Studies, which will complement a print roundtable discussion released in fall 2022 ahead of its first issue. Distinguished speakers include Troy Duster (UC Berkeley), Terri Givens (McGill), Ângela Figueiredo (Federal do Recôncavo da Bahia), Daniel HoSang (Yale), and Carole Joffe (UC San Francisco). The event will be hosted by JRWS Editor-in-Chief and Chair of CRWS Lawrence Rosenthal and JRWS Managing Editor Eliah Bures. Speakers will briefly present their expert opinions, followed by a Q&A and discussion. We encourage the audience to stay until 11 am to continue the discussion. 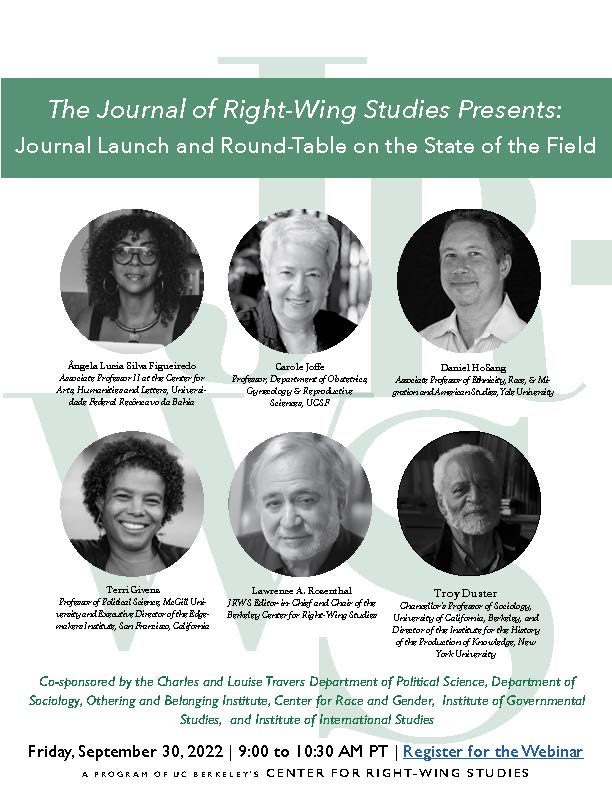 "The end of abundance": Energy issues in France and Europe, in the context of the war in Ukraine.

Lecture | 11 a.m.-12 p.m. Speaker: Noëlle Lenoir, Lawyer; former Justice, French Constitutional Court Moderator: Jonah Levy, Professor, Department of Political Science; Director, Center of Excellence in French and Francophone Studies Sponsors: Institute of European Studies, Center of Excellence in French and Francophone Studies Since the beginning of the war in Ukraine in February, an energy crisis has started to worry many countries dependent on Russian gas. The upcoming winter is expected to be a test not only for the French and European governments, but also for the climate and energy policy of the EU. Noëlle Lenoir is a leading..

Strength in Numbers: A Discussion of Perils of Polling and a Way Forward

Tanner Lectures: For the People? Representative Government in America